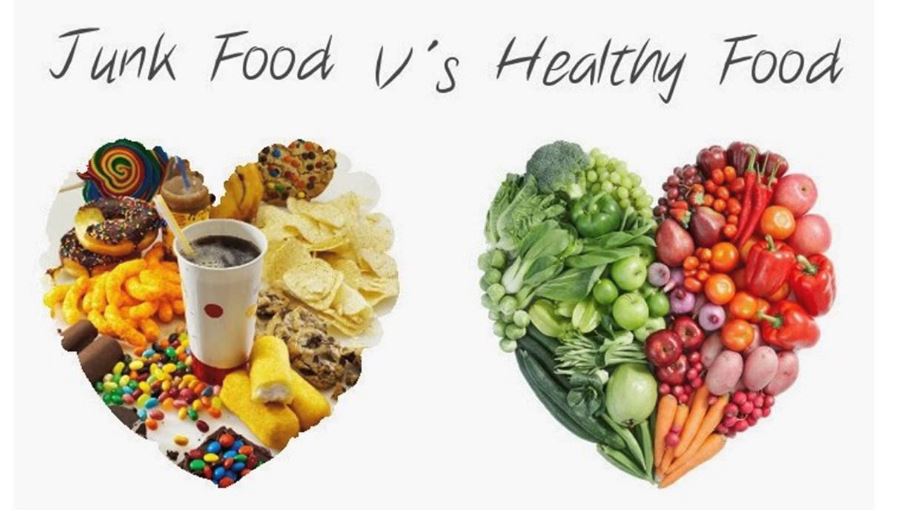 “Unhealthy” food is often full of fat, sugar, and salt. These are all things that are totally necessary for our survival and historically have been hard to come by, so our bodies make the psychological reward for consuming them great. The problem is that these days they’re not hard to get, and our bodies haven’t had enough time to adjust to this, so we’re inclined to eat lots of food that has these things even though we don’t need to eat lots of it.

Additionally, “unhealthy” food is typically highly-processed, which has two effects. First, due to the desire to make it as cheap as possible, the processing can destroy or strip out healthy micro-nutrients. Second, due to the desire by companies making these foods for people to eat lots of them, a lot of flavor engineering goes into making them taste awesome, usually by using added flavors. We always want fat, sugar and salt right? Our body has developed systems to respond very favorably to them because in nature they are really hard to get to in large quantities, and our body really needs them. So they taste good to make it worth the effort for us to work so hard to get them.

So why are these unhealthy? Short answer: They aren’t.

Anything is unhealthy if you eat too much of it, but our body needs these things, so instead of getting rid of them like it does for, say, soluble vitamins. It has developed a system to keep them around.

Now that people have an abundance of food. We eat what tastes good, and we eat too much of it. It isn’t the food that is unhealthy, it is the amount and proportion of our diet that it is.

Excess Sugar and Fat Are Only Healthy in Moderation

Our bodies instinctively like foods with high energy contents: fats, oils, and sugars. It’s a survival mechanism that isn’t really helpful any more. Cavemen who ate animal fats and oils tended to live longer through the cold winters than the cavemen who ate kale. We’ve evolved to favor the foods that would keep us alive longer.

Humans are adapted to an environment of few calories. The excess of calories in human diet is a very recent thing. So our tastes were adapted to like high calories food.

Most tasty things were relatively difficult to find when we were still growing up as a species. The people that liked that taste took special care to eat as much of that rare nutrient as possible because there was no telling how long it would be until they came across it again.

The reason why these things are unhealthy for us in a modern context is because we’ve basically defeated nature. We have easy access to absurd amounts of these food stuffs that were once incredibly rare. I can go to the store and buy a huge sack of sugar versus hunter/gatherer who had to eat small fruits whenever he was able to find some.

You need all those things that are “unhealthy.” The only thing unhealthy about them is how easy it is to eat too much nowadays.

But healthy foods can taste great as well! You maybe accustomed to very high-fat, salty or sugary foods and the high you get from eating them, but if you cut them out and give yourself time to readjust, you’ll enjoy healthy foods much more. After a while, you’ll taste the unhealthiness in processed foods and prefer healthy ones.

It’s kind of like smoking. Cigarettes are gross and stinky, but you don’t really realize it when you smoke all the time. You’re addicted, so you think they’re good. But after you stop, you recognize how awful they are.

That being said, fat and salt add flavor, but it’s best to get those as part of a healthy food.

Want to enjoy healthy food? Then cut back on the unhealthy stuff and your taste will slowly realign. Go a month without a coke and you’ll find it much less pleasant and maybe too sweet.

What Makes a Food “Unhealthy”?

Sure, the terms “healthy” and “unhealthy” are not precisely defined, but I think it is fairly easy to identify if something is unhealthy. Yes, there is some contention regarding sugar alternatives (I think agave – a natural alternative – is the only one generally considered to be a healthy substitute), and recent thinking is challenging the orthodox belief that fat is unhealthy. I’m no nutrition expert, but I do take an interest and will watch most programs/documentaries on the subject.
Dosing and Phentermine Online consuming should be strictly prescribed by your doctor. Do not use it by your own decision.

I’m still waiting for anybody to name a healthy food or drink that is routinely advertised. I think the last one I can remember is Quaker Porridge Oats, and I suspect that was several decades ago. Milk is another possibility, but then some people are lactose intolerant (aside: I believe there was a genetic mutation originating from Lithuania that means a lot of Europeans are not lactose intolerant after childhood).