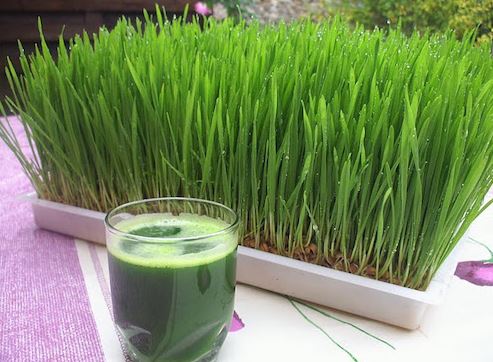 1 Wheatgrass Juice is one of the best sources of living chlorophyll available.

2 Chlorophyll is the first product of light and, therefore, contains more light energy than any other element.

3 Wheatgrass juice is a crude chlorophyll and can be taken orally and as a colon implant without toxic side effects.

4 Chlorophyll is the basis of all plant life.

5 Wheatgrass is high in oxygen like all green plants that contain chlorophyll.  The brain and all body tissues function at an optimal level in a highly-oxygenated environment.

6 Chlorophyll is anti-bacterial and can be used inside and outside the body as a healer.

7 Dr. Bernard Jensen says that it only takes minutes to digest wheatgrass juice and uses up very little body energy.

8 Science has proven that chlorophyll arrests growth and development  of unfriendly bacteria.

9 Chlorophyll (wheatgrass) rebuilds the bloodstream.  Studies of various animals have shown chlorophyll to be free of any toxic reaction.  The red cell count was returned to normal within 4 to 5 days of the administration of chlorophyll, even in those animals which were known to be extremely anemic or low in red cell count.

10 Farmers in the Midwest who have sterile cows and bulls put them on wheatgrass to restore fertility.  (The high magnesium content in chlorophyll builds enzymes that restore the sex hormones.)

11 Chlorophyll can be extracted from many plants, but wheatgrass is superior because it has been found to have over 100 elements needed by man. If grown in organic soil, it absorbs 92 of the known 102 minerals from the soil.

12 Wheatgrass has what is called the grass-juice factor, which has been shown to keep herbivorous animals alive indefinitely.

13 Dr. Ann Wigmore has been helping people get well from chronic disorders for 30 years using wheatgrass.

14 Liquid chlorophyll gets into the tissues, refines them and makes them over.

15 Wheatgrass Juice is a superior detoxification agent compared to carrot juice and other fruits and vegetables. Dr Earp-Thomas, associate of Ann Wigmore, says that 15 pounds of Wheatgrass is the equivalent of 350 pounds of carrot, lettuce, celery, and so forth.

17 Chlorophyll neutralizes toxins in the body.

21 Wheatgrass Juice cures acne and even removes scars after it has been ingested for seven  to eight months.  The diet must be improved at the same time.

22 Wheatgrass juice acts as a detergent in the body and is used as a body deodorant.

23 A small amount of wheatgrass juice in the human diet prevents tooth decay.

24 Wheatgrass juice held in the mouth for 5 minutes will eliminate toothaches.  It pulls poisons from the gums.

26 Drink Wheatgrass Juice for skin problems such as eczema or psoriasis.

28 Pyorrhea of the mouth: lay pulp of wheatgrass soaked in juice on diseased area in mouth or chew wheatgrass, spitting out the pulp.

29 By taking Wheatgrass Juice, one may feel a difference in strength, endurance, health, and spirituality, and experience a sense of well-being.

31 Wheatgrass juice is high in enzymes.

32 Wheatgrass juice is an excellent skin cleanser and can be absorbed through the skin for nutrition. Pour green juice over your body in a tub of warm water and soak for 15 to 20 minutes.  Rinse off with cold water.

33 Wheatgrass implants (enemas) are great for healing and detoxifying the colon walls.  The implants also heal and cleanse the internal organs.  After an enema, wait 20 minutes, then implant 4 ounces of wheatgrass juice.  Retain for 20 minutes.  If you don’t want to use wheatgrass, try a baking soda enema.

34 Wheatgrass juice is great for constipation and keeping the bowels open.  It is high in magnesium.

35 Dr. Birscher, a research scientist, called chlorophyll “concentrated sun power.” He said, “chlorophyll increases the function of the heart, affects the vascular system, the intestines, the uterus, and the lungs.”

36 According to Dr. Birscher, nature uses chlorophyll (wheatgrass) as a body cleanser, rebuilder, and neutralizer of toxins.

37 Wheatgrass juice can dissolve the scars that are formed in the lungs from breathing acid gasses.  The effect of carbon monoxide is minimized since chlorophyll increases hemoglobin production.

39 Wheatgrass Juice can remove heavy metals from the body.

40 Wheatgrass juice is great for blood disorders of all kinds