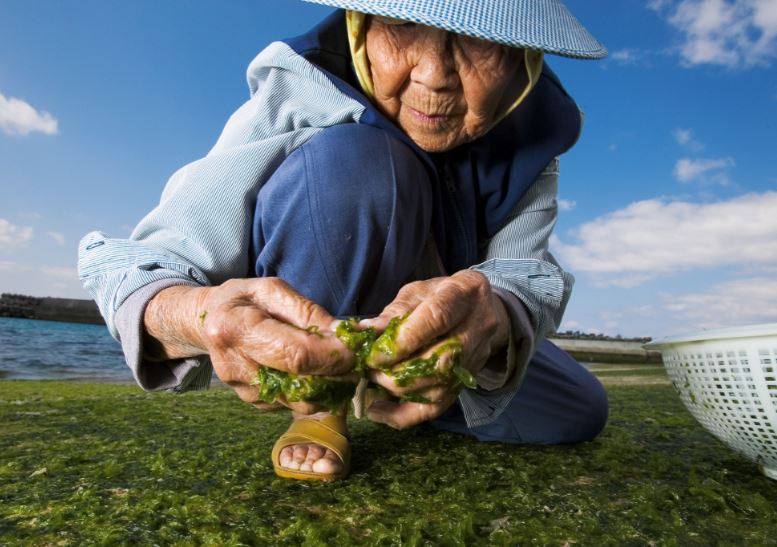 Midlife studies of healthy aging have consistently identified smoking, overweight and obesity, physical activity, alcohol use, and marital status as important (and potentially modifiable) factors for healthy aging.  But imagine a place where joints ache less, minds and memories remain stronger, digestion problems are few, a good night’s sleep is normal, and energy levels stay shockingly youthful – even at age 90 and beyond.

In this place cancer is virtually unknown.  People’s arteries function as well at 85 as they did at 18 – and their odds of having a heart attack or stroke are the lowest in the world.

Crazy Long longevity exists today – in Okinawa, on the sun-drenched Mediterranean Island of Crete and even in the modern 7th day Adventist households of America.

What They Have In Common?

What do these people have in common?  Primarily, a healthy attitude and an even healthier diet.  The foods people eat every day in these places might amaze you.  On a single day in Okinawa, the average person eats nearly a dozen helpings of fruit and vegetables, seven servings of noodles, rice, and grain, plus tofu, fish, seaweed, and green tea.  Dairy foods and red meat are rarely seen – or eaten. At night, friends knock back a glass or two of a fiery alcoholic drink made with hot peppers. The menu is similar in Crete, where poultry and fish replace soy foods as the primary protein and locals sip their own homemade red wines.  The story is the same with 7th Adventists, except they eat eggs and nuts for much of their protein.  Many 7th Adventists are vegetarians who also abstain from alcohol, tobacco, and coffee.

Absent in Their Diets

The payoffs for a life free of cheese-drenched French fries, breakfast sweet rolls, and mega gulp drinks?  Healthy-eating 7th Day Adventists live up to 9.5 years longer than other Americans, say researchers who tracked the diets and health histories of over 34,000 members of this Christian denomination.  Okinawans have the longest life expectancy in the world – the average man lives to be 77, the average woman to 85.  And more people on Okinawa have celebrated their 100th birthdays than people from anywhere else in the world – 35 in every 100,000.  On Crete, the healthiest eaters were 25 percent less likely to die during a four-year study then their fellow countrymen who opted for more modern meals. “We think diet plays an extremely important role in how long people in these parts of the world live and in how long they remain healthy, active, independent, and happy,” Says Bradley Wilcox, MD, of the Pacific Health Research Institute in Honolulu and lead researcher of the Okinawa Longevity Study. “A low calorie, low-fat, plant based diet is the key to maximizing life expectancy and minimizing the risk for all of the debilitating health problems that come with ageing.

The right food can be a prophylaxis that can actually thwart illness. The Okinawan people — who are the longest lived people in the world — use the term nuchi gusui, which literally means “food is medicine.” But modern medicine is just beginning to understand the biochemistry behind the concept of food as medicine. After two decades of research, I believe that the Okinawan diet is a veritable Rx for longevity.

What we’ve learned is that certain micronutrients found in Okinawan sweet potatoes, turmeric, and marine-based carotenoid-rich foods (e.g., seaweeds and kelp) are particularly potent. Such foods can actually help prevent you from getting ill. By some estimates, 80% of coronary heart disease (CHD) and type-2 diabetes mellitus and 40% of cancers may be prevented by modifying dietary habits (as well as engaging in regular physical activity and avoiding tobacco).

Wouldn’t it be great if drug companies came up with a pill or supplement based on this kind of diet that helped prevent you from getting a chronic disease?

Food Is More Important Than Genes

In fact, what you put on your plate and in your mouth counts even more than whether or not you were born with longevity genes.  “You could have Mercedes-Benz genes,” says Dr. Willcox, “but if you never change the oil, you are not going to last as long as a Ford Escort that you take good care of.”

Consuming the right foods, with the right micronutrients, mitigates risk for many age-associated diseases and, perhaps, modulates the very rate of aging. Thus it’s no coincidence that the Okinawans consume home grown turmeric, sweet potatoes and other local foods, including several vegetables rich in marine phytoactive compounds.
​
Sources: