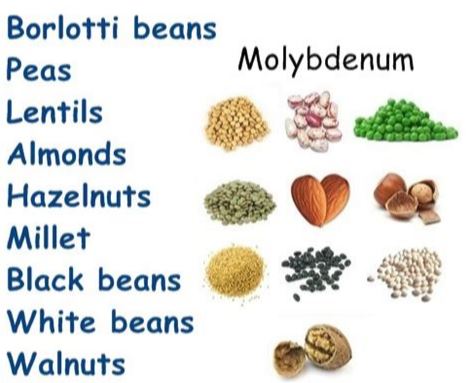 Molybdenum is a trace mineral that is essential for human health, but it is needed in very small amounts. It is found in a variety of foods, including legumes, nuts, grains, and leafy vegetables, and it is also available as a dietary supplement.

Some potential health benefits of molybdenum include:

Trace mineral elements are as important as other nutrient elements, but many people are not even aware that some exist. Due to this reason, we shall dissect one trace element, and the one of the most important: molybdenum. This is a trace element that is mostly absorbed from the soil by the plants and supplied to our bodies. However, there are also commercially available brands in the market sold as molybdenum supplements.

Without Molybdenum in the body, serious health conditions can arise. In the same way, too much of it can also lead to complications in our bodies. There is a recommended dietary consumption of this trace mineral although hardly are there any cases of molybdenum toxicity in the record from food intake.

Other Molybdenum Health Benefits on the body:

How Does Molybdenum Work In Our Bodies?

Some of the foods high in molybdenum are green peas, cucumber, eggs, and sunflower seeds. Basically, legumes and leafy vegetables like carrot leaves and beet greens are considered as good sources of molybdenum. Animal products like liver and milk are alternative sources too. 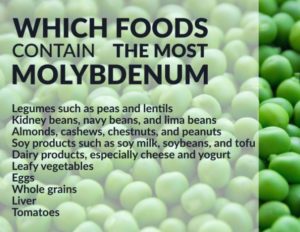 So far, we have seen that molybdenum is a cofactor for various important enzymes and it plays vital roles in keeping our bodies healthy. However, it would also be much advantageous if we know the exact mechanical processes that help in the transformation activities.

Once you consume a food component that has molybdenum in it, the element is absorbed by the blood from the gastrointestinal tract and taken to the liver, kidney, skin and other areas of the body for storage. The rest is converted into molybdenum cofactors while the excess is excreted through urine.

Since the majority of the foods we consume on our daily basis have molybdenum in a substantial amount, most of what is taken in passes out as urine. This prevents toxicity in the body. If left to accumulate in the body, it can cause liver and kidney problems as well as cause deficiency of some other elements like copper.

The molybdenum cofactors we mentioned earlier activate four essential enzymes that help in the metabolic processes in the body.

Sulfite oxidase: Sulfites are natural elements that are found in food substances and prevent oxidation and fermentation. It basically maintains freshness in products. Despite this important sounding property, FDA made it illegal to add sulfites to food substances. This is mostly due to the toxic nature it can take in the body when it reaches unacceptable levels. It converts sulfite from foods to sulfate for absorption by the body

Aldehyde oxidase: Aldehyde is a compound freely available in the foods, drinks, and even cooking oils. For example, the aldehyde in oils gives them antifungal and anti-inflammatory properties. If the aldehyde is not oxidized, it can accumulate in the body and cause negative effects. It also helps to break compounds in alcohol to prevent alcohol flush. We cannot conclude on the molybdenum health benefits under this category without mentioning that it also helps the liver to break down all the medications we take.

Xanthine oxidase: Xanthine is a purine compound, or it can be broken down to uric acid. High concentration of these compounds can be toxic to the body. Just like the other elements we have discussed it is also freely available in our foods like it is present in tea and coffee. After the purines are converted into uric acid, they are carried to the kidney for excretion through urine.

Mitochondrial amidoxime reducing component: The main functions of this enzyme is mostly to remove the toxins and metabolic byproducts from the body. It is particularly effective in the detoxification of N-hydroxylated compounds.

What Forms of Molybdenum Supplements Are Available?

Molybdenum supplements are available in the market as either liquid or tablets. None can be disputed based on form although we can mention that the liquid ones are more expensive than the capsules. Some of the providers of molybdenum supplements are Seeking Health and Allergy Research Group. Because no major molybdenum deficiency have been reported or recorded in quite a while, supplements should only be taken under the prescription from a medical doctor to avoid toxicity. 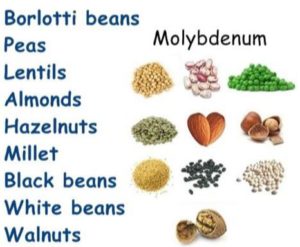 A Final Note On Molybdenum Benefits:

If out of any logical reason you suspect to have molybdenum deficiency, you can eat legumes and leafy vegetables. Molybdenum supplements are also an option but follow the instructions given correctly to avoid toxicity. High doses of this micronutrient element are not desirable although the body has its own ways of removing excess molybdenum through urine.

Why Molybdenum Is an Essential Nutrient. (2018). Retrieved from https://www.healthline.com/nutrition/molybdenum#section3

Which Foods Contain The Most Molybdenum?. (2018). Retrieved from https://www.dovemed.com/healthy-living/wellness-center/which-foods-contain-most-molybdenum/