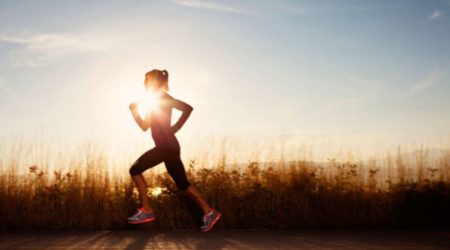 If  you follow an unnatural sedentary lifestyle—which is becoming all too common given computer work, computer play, and television—you will not only add fat to your body, but also increase feelings of fatigue, lethargy, unease and unhappiness. Here are more benefits of exercise:

Exercising regularly throughout the week naturally suppresses appetite. In one study led by David Stensel, an exercise physiologist at the School of Sport and Exercise Sciences at Loughborough University in England, researchers found that exercise suppresses ghrelin, a key hunger hormone, while it also increases levels of peptide YY, an appetite-suppressing hormone. In an article for Scientific American, Stensel also points to studies that suggest exercising may encourage people to crave healthier foods. A research team at the University of Chile Clinical Hospital, led by A. Veronica Araya, M.D., discovered that after a three-month program of aerobic exercise, study participants reported consuming fewer calories than they were at the beginning of the study. They were not instructed to change their eating habits; they were asked only to exercise regularly on a treadmill or bicycle. Levels of a protein known as BDNF (brain-derived neurotrophic factor) greatly increased over the three months. The research team speculates that BDNF could suppress the appetite.

Exercise is also necessary to maintain balanced emotional and mental states. During exercise, various brain chemicals are stimulated that promote cognitive functioning and reduce anxiety, depression, and negative mood, thereby improving self-esteem as well. After just 25 minutes, mood improves, stress is reduced, and energy is raised. In fact, a growing body of evidence has led a number of mental health professionals to advocate for exercise as an overlooked prescription for depression and anxiety. Based on their analysis of dozens of clinical studies, population-based studies and meta-analytic reviews on exercise and mental health, psychologists Jasper Smits and Michael Otto published a therapist guide with Oxford University Press titled, Exercise for Mood and Anxiety Disorders.

Ongoing research is finding that not only does exercise promote psychological health, but it also promotes brain health and plasticity. In the peer-reviewed journal Trends in Neurosciences, numerous researchers report on this exciting new field of investigation. What that they’re learning is that exercise increases brain-growth factors such as levels of brain-derived neurotrophic factor, or BDNF (which was mentioned earlier as a likely appetite suppressant). Exercise also stimulates neurogenesis, which is the growth of new cells, as well as increasing neuronal survival and the brain’s resistance to damage. The benefits continue, as research shows that exercise enhances the brain’s capacity for learning and contributes to the maintenance of cognitive functioning during the later years of aging.

Exercise boosts the immune system. During exercise, two types of immune cells that neutralize pathogens circulate more freely in the blood. Although the immune system returns to normal within three hours, the effect of exercising is cumulative, adding up to reduced illness rates over time. So not only will you get sick less often, but you will also bounce back faster when you do get sick.

Demetrius Albanes, a researcher at the National Cancer Institute in the United States, has an opinion on exercise.  He says that although researchers have yet to determine all the mechanisms involved, regular exercise is one of the factors in lowering the risk for certain cancers.  This is particularly true for breast and colon cancer. According to Gerald Shulman, a cellular and molecular physiologist at Yale University School of Medicine in the United States, exercising may prevent and even reverse type 2 diabetes. When someone runs, cycles, or does other vigorous exercise, the muscle contractions increase the production of AMPK, an enzyme that promotes the breakdown of fats that interfere with cells’ glucose transporters.

As Dr Robert Sallis, Kaiser Permanente’s chairman of exercise explains in The Hidden Benefits of Exercise, “Exercise can be used like a vaccine to prevent disease and a medication to treat disease . . . If there were a drug with the same benefits as exercise it would instantly be the standard of care.”

It’s long been known that regular exercise strengthens the heart and the lungs. Now what’s also clear is that exercise also builds and maintains strong bones, reducing the risk of osteoporosis. Like muscles, bones become stronger when they must bear weight. When muscles bear weight and contract, they exert force on the bones that support the body parts, and that force stimulates the bones to maintain or even to build tissue. Researchers are still trying to figure out why this happens. According to Robert Recker, an endocrinologist at the National Osteoporosis Foundation in Washington D.C., working out our muscles also increases our resting metabolic rate—which means that the more we move, the more we burn fat and the more efficiently we process food all the time. As an added bonus, we experience increased levels of energy.

Exercise has many benefits. It helps in warding off diseases. Exercises promotes healthy physical function. It definitely helps in contributing to a good night’s rest. Exercise also increases energy levels and can even strengthen our sex drive.  Regular exercise is clearly good for our overall health!

The message is clear: Get moving!