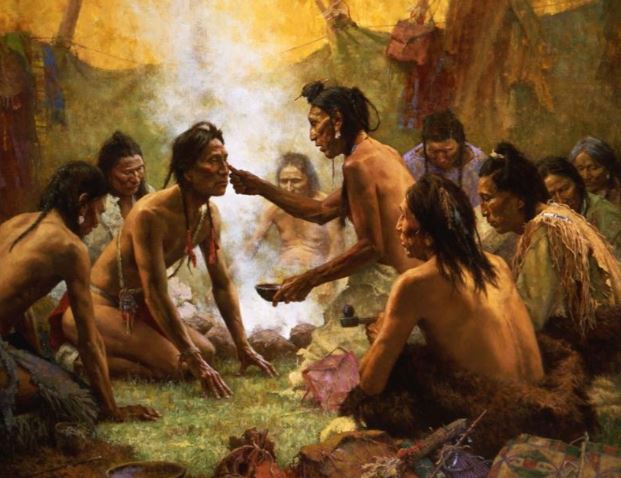 The Cherokee Nation is a Native American tribe that hails from Oklahoma and surrounding American states. Cherokees believe that they were given herbs and plants by their Creator, gifts which allowed them to treat and cure illnesses and ailments. Indian herbal remedies have been practiced by Cherokee and other Native American healers for hundreds of years. Their extensive knowledge of the healing properties of regional herbs and plants was handed down from one generation to another via specially chosen healers and shamans.

Native Americans used a unique gathering method, picking only every third plant in order to ensure that the plants they relied on might continue to grow for generations to come. Today, many of the herbs and plants that the Native Americans once used have grown scarce due to overconsumption and damage to the land. “Nature’s pharmacy” is slowly being depleted.

If you decide to gather any of the following wild herbs and plants, please be gentle and selective so that the plant may continue to proliferate.

Before you read on, remember that these plants contain potent chemical compounds that can be dangerous if not used properly.

Instead, purchase plants that have been harvested by knowledgeable hands and take them under the guidance of a licensed naturopath. Buckbrush root was used by traditional Cherokee healers as a medicinal substance with diuretic properties. It was traditionally used to stimulate proper kidney function.

Members of the same plant family also have been used to treat mouth and throat ailments, inflammation, and cysts and tumors, along with specific health issues such as inflamed tonsils, childbirth aftercare, hemorrhoids, swollen spleens, and swollen lymph nodes .

It is easiest to consume in a tea form. Bring water to a boil, then steep the roots and bark in water for approximately five minutes.  Drink immediately.

Today, mint is frequently consumed in beverages, including both tea and iced tea. But what most people don’t know is that it is a powerful antioxidant that also contains vitamins A and C, as well as phosphorus, calcium, potassium and magnesium.

The Cherokee drank mint tea to stimulate the digestive system and lower blood pressure. They crushed mint leaves to create salves and ointment and used mint in baths to relieve rashes and itching. Yarrow has blood-clotting properties, which can help a minor wound to form a scab and heal. When ingested with water, it can help to reduce tissue inflammation, especially in the intestines and digestive tract.

Cherokee healers used yarrow for all these ailments and more. Prepared as a tea, yarrow was believed to help improve the function of the kidneys and gallbladder. A concoction of leaves and stems was also applied topically to treat skin conditions such as dry skin and acne. Wild Ginger has been used by a wide variety of Native American tribes for medicinal purposes. The Cherokee Nation drank a mild infusion of wild ginger in order to stimulate digestion.

Wild Ginger, which does not come from the same plant as the spice used in cooking, was known to help with ailments such as colic, intestinal bloating and gas, and stomach aches and cramps It was also used to rid the lungs of excess mucus. Among Native American tribes, this plant was used as a blood purifier and mild diuretic. Cherokee healers may have also used a tea made from the roots to treat arthritis.

Additionally, the leaves and bark of the plant could be mixed with lard to create a salve that helped treat minor burns, cuts, scrapes, and sores. Who knew blackberries were actually a potent health supplement? The Cherokee used them to sooth stomach problems. Today, research has shown that blackberries are rich in bioflavonoids, antioxidants and other healing compounds.

Cherokee healers ground up the roots of blackberry plant, sweetening them with honey. This concoction was used to soothe sore throats, coughs, bleeding gums, and mouth sores. The root also has anti-inflammatory properties that reduce swelling and improve joint mobility. This herb is often used as an ingredient in salads. It has a sweet but also sour taste and is chock-full of healthy vitamins and minerals.

Among Native American tribes, it was used as a rich source of iron. It was also believed to have laxative properties. When ground up and mixed with beeswax and a bit of oil, it was used as an ointment for minor cuts, sores, rashes, and other skin irritations. The Cherokee avowed that this traditional herb could help with lung and respiratory problems. They burned mullein roots and inhaled the smoke, which they believed opened up the airways and eased inflammation of the mucous membranes that line the respiratory tract. The flowers of mullein can also be used to prepare a sedative tea to treat joint pain as well as migraine headaches.

Cattail is not a medicinal treatment, but a type of preventative medicine. According to the Cherokee tradition, it can also prove helpful in the recovery process. The entire plant may be eaten, save for the leaves and the heads of the seeds. A hearty plant, cattail is a reliable traditional food source because of its high starch content.

Sumac is a potent spice that has medicinal properties. The Cherokee nation used a decoction made from sumac bark as a remedy for a sore throat. It was also prescribed for diarrhea. The leaves of the sumac plant may be steeped to make a tea used to treat fever. In addition, fresh leaves can be mixed with berries to create paste that soothes poison ivy. Rose hip contains a significant amount of vitamin C. It can therefore be used to prevent and treat common illnesses such as the cold and flu.  Rose hips can also heal stomach spasms, stomach acid deficiency, prevent stomach irritation and ulcers and treat intestinal diseases.

The Cherokee used this herb in a tea form to stimulate the kidneys and bladder. A tea made of the petals was traditionally be used to soothe a sore throat while the roots were used to cure diarrhea.